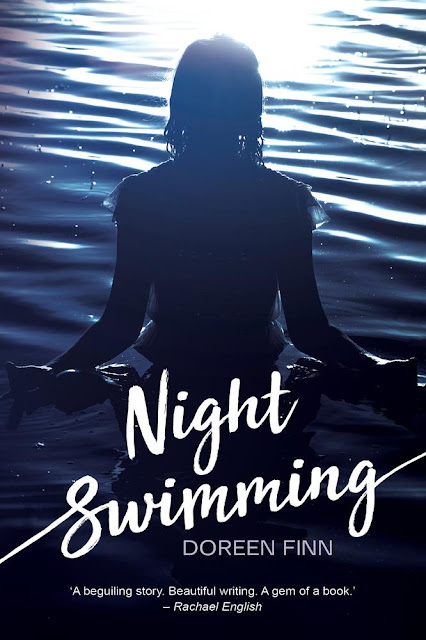 Summer 1976. A heatwave is gripping Ireland. Nine-year-old Megan lives in a redbrick house in Dublin with her mother, a beautiful and lonely artist, and her grandmother; her father's whereabouts are a mystery that she often thinks about. When an American family moves in downstairs and Megan's mother begins a tentative affair with the father, everything that Megan is sure of starts to unravel…

Congratulations on your new novel Doreen - What a stunning cover! I love the title 'Night Swimming' - I immediately thought of the R.E.M song, is there a connection? There most certainly is a connection between my novel and the REM song! When I was writing the first, tentative draft of what became this book, I was casting around for a title. I was listening to Automatic For The People, REM’s seminal album, and on came the song. It fitted perfectly with the themes within the novel, and with the thread of slipping outside at night to play. I’m a huge REM fan, so it was meant to be!

I chose the 1970s because it was the decade of my own early childhood, and 1976 was the standout year because of the heatwave. I needed to have good weather in the story, because the book is essentially about loss of innocence and a love affair. I wanted to have the weather reflect the passion of the characters, and I knew that if I set the book in a cold January that the chances of a torrid affair would be slim! Also, the seventies are really hot nowadays in terms of their cultural value, and my generation is both nostalgic and protective of that era. I wanted the story of childhood to be authentic, and what could be more authentic than my own experience of that time? To set the same story in the present day wouldn’t work for me, because of technology. There are two missing fathers, an unbridgeable gap between the Irish and the American experience of life, and an ignorance of the wider world, all of which can solved instantly now with a quick Google search. I wanted to keep that innocence, spin it out and see where it took me.

Your first novel 'My Buried Life' was told the point of view of an adult. This time, Megan your main character, is a young girl. Was her voice easy to slip into? It’s a very different experience. My editor, Noel O’Regan, picked up many points throughout the book where the child’s voice wasn’t childish enough. Because my first novel, My Buried Life, was narrated by an adult female, making Megan’s voice authentic took a lot of work. I had to be careful with things that she would say and wouldn’t say, how she sort-of thinks something may be happening between her mother Gemma and Chris, the American, but she can’t be sure because she doesn’t have the world view or understanding to be fully sure. That sort of thing.  I observed my own two children in their interactions with each other and with their friends, to see how kids see things, what they say in any given situation.  So yes, it was actually harder than writing from an adult’s point of view. My next book will be narrated by an adult, and book 4 will be back to a child’s narration again.

I love good writing. I will cartwheel over broken glass for good prose and well-developed characters. There are so many books being published now that it takes a discerning reader to pick out the books that will appeal to us personally. Mostly, I read women, and within that I tend to read Irish women. It’s not a choice as such, just more the way my tastes lie. My absolute favourite writer of all is Maggie O’Farrell, who I just adore, and who I wish would bring out a book every week so I’d never again have to wonder what to read next! I also admire your good self, Niamh, Julia Kelly, Nuala NiConchuir, Sally Rooney, Claire Kilroy, Anne Enright, Colm Toibin, Janet Fitch, Sadie Jones, Kit de Waal.

For mystery, no one beats John Banville writing as Benjamin Black, and no author makes me laugh as much as David Nicholls, who is such a sensitive writer. This year, I’ve loved Tin Man, Cape May, Dear Mrs Bird, The Last of Summer, The House on Vesper Sands, An American Marriage, Daisy Jones and the Six. In non-fiction, Constellations by Sinead Gleeson is a standout book. She’s a brilliant writer. Last year I revisited the PD James canon, which I loved, and I'm already stockpiling books for autumn.’ For me, there is no greater disappointment than a disappointing book. It grieves me.

Any tips for other writers? In terms of getting from idea to finished novel? It sounds trite, but the best thing anyone who aspires to write should do is to write. Keep a notebook with you that you can use to write down interesting things you hear or read, nice phrases that you hear someone use. If you have any story ideas, no matter how insignificant they may seem, write them down. And try your hand at writing, in whatever form you feel suits you best. I don’t believe that everyone should start writing short stories before they tackle a novel. Short story writing and novel writing are two entirely different skill sets, and not everyone possesses both. Flash fiction is great for flexing your creative muscles, as is trying something really rigid and structured like Haiku or Tanka. Someone once told me that I should always write with a reader or audience in mind, and actually that was terrible advice – if you’re writing for the first time, write for yourself. Don’t worry about what anyone else will think. You don’t have to show your writing to another living soul until you feel ready, and you won’t feel ready until you’re confident about what you’re doing.

So keep at it, stick with it, and see where the stories take you. I don’t plot and I don’t draw out maps for my books. I start with a character and a setting, usually a female in a house, and I take it from there. The other most important and vital piece of advice to budding writers is to read. Read, read, read, and then read some more. Never stop reading, because it’s only through seeing what other writers produce that you will learn and understand what you want to do yourself.

What's the worst writing advice you've ever gotten? As per the answer above, being told to write with someone else in mind, for an audience. It was terrible advice, and it wasted a huge amount of writing time for me. It’s like being told to dress for someone else, or find hobbies that someone else likes. You write for yourself. Always. If other people don’t like it, who cares? You’ll always find your readers, and they’ll love what you write.

Thanks for coming by Doreen, and best of luck with your next novel. Follow Doreen on twitter for all her writing news - @doreen2cv

Night Swimming is available from Mercier Press,
all good bookshops & Amazon
About the author: Doreen Finn was born in Dublin, where she now lives with her family. A graduate of UCD, she has lived and worked in Madrid and Los Angeles. Her first novel, My Buried Life, was runner up for the Kate O’Brien award. Night Swimming is her second novel.

GET POSTS BY EMAIL !