Welcome! I designed this page for Book Clubs and other readers, or anyone remotely curious about Her Kind and the story behind it! There are many possible questions, what follows are just a few suggestions - if you have anything you'd like added, feel free to get in touch though the contact form. 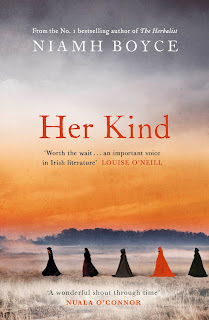 Gripping ... a complicated story of loss, ambition, misogyny, family love and what it means to belong ... evocative and atmospheric.' Irish Times

'Beautifully written and transports us to the 14th century, though its themes loudly resonate today.' RTE.ie

'A beautifully absorbing novel, illuminating the remarkable story of a woman whose life has since been subsumed into folklore. Highly recommended.' Hot Press

A literary thriller based on the first witchcraft trial in Europe.

Her Kind is a re-imagining of the 1324 Sorcery Trial of Dame Alice Kytler. It was a landmark case in the history of witchcraft trials, the first case of a woman accused of having a demon lover (an incubus) and leading a sect of sorceresses - it was also the first time in Europe that someone was burned as a witch.

The case was notorious at the time, but was subsequently relegated to folklore – until now. The judges of the EU Prize for literature, called Her Kind 'as searing a critique of our own times as is Arthur Millar's The Crucible.' 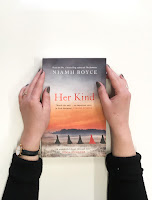 Q. The word witch – how does its use differ nowadays? Can you still destroy someone’s reputation by calling them a name? What names have the same affect now as ‘witch’ did, in medieval times?

Sorcery, religion, politics, greed, privilege, power – all pale in comparison to what one finds at the heart of this story: that natural connection, the love of a mother for her child.(Historical Novels Review)

Q. What do you think Ledrede’s real motivation for accusing Alice Kytler of witchcraft was?

‘The cathedral was also where I came across the anchoress’s grave. An anchorite or anchoress is a hermit who gives up ordinary life for a solitary life of prayer – they are often sealed in between the walls of a church, with only small ‘squints’ or windows to receive food through. The figure of a nun is carved onto the anchoress’s grave stone.  Her hands are held in old style prayer position, palm facing outwards rather than palms together. When I placed my palms over her stone ones, I felt a strange sensation, close to the one that Petronelle describes in Her Kind, that of an old truth pushing back – that day the character of Agnes the anchoress came to life.’ (Niamh Boyce)

Q. How did you feel towards Alice? Towards Petronelle? Towards Basillia? Towards Ledrede? Did you prefer one character over another?

Q. In 14th century, the Pope was based in Avignon, France and he had a lively fear of sorcery and witchcraft. He accused members of his own court of sticking pins in his waxen likeness.  Richard Ledrede, was one of his more favoured clerics. He gave him the Bishopric of Ossory in Ireland. Richard, an Englishman, had never set foot in the country yet within a few weeks of his arrival, he was making accusations against his parishioners…
Was it inevitable that someone like Richard Ledrede would make accusations of sorcery against one of the residents of Kilkenny?
The novel is beautifully written and transports us to the 14th century, though many of its themes loudly resonate today. I can’t wait to see where Niamh Boyce takes us next. (RTE Guide)
Q. Was the world of Her Kind familiar or strange to you? What had you expected medieval Ireland to be like? How was it different? What resonated?

Q. Ledrede’s words and phrases are woven throughout the novel, as factual and fiction weave – why do you think has not been given first person narration, the way Petronelle and Basillia have been?

Q. Her Kind is based on a real trial - a landmark case in the history of witchcraft - did that affect how you felt about the characters and their fate? Had you heard of the case before this? Why do you think this is?

Q. If you were to retrieve a voice from history, whose would it be? 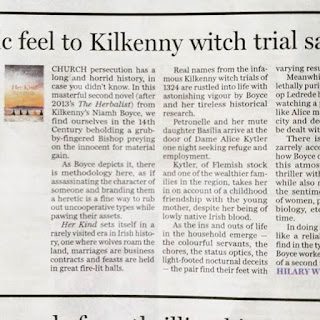 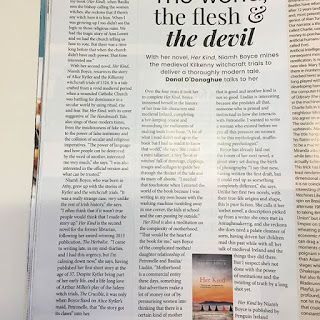