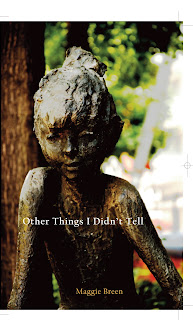 Maggie Breen's first collection, Other Things I Didn't Tell has recently been published by Scallta Media. I relished the poems in this book, Maggie has an almost uncanny ability to evoke the details of childhood - from the slap of wellies against bare legs, to the 'wrinkly witch fingers' of a child in the bath - the vividness of imagery throughout the book, is quite startling and original. Paula Meehan has this to say about Breens work -

“Maggie Breen digs deep into personal memory to unearth a vivid picture of a rural childhood, to reclaim that childhood in language, and to reinhabit with power and grace the landscape of those early years. She shines light into the darkest reaches of community and family life and celebrates the tenacity and endurance of the child self. She gives us poems rich in promise: even as she unpacks the complex baggage of a young Irishwoman determined to take the world on her own terms, she succeeds in celebrating the very blessings of that difficult path. These poems bring to mind Kavanagh’s beautiful phrase —To look on is enough / In the business of love.” Paula Meehan

Most of the poems are from the 'I' point of view Maggie, but as we know the poetic 'I' is not always the poet. Is this collection autobiographical, is it inspired mainly by specific memories? For the most part, the poems are indeed specific memories, mainly from my childhood. In some cases, for example, 'Hypnotist' this is a combination of memories and feelings rolled into one event. I know that the incense would have only been used for funerals and in the poem I am portraying the pattern day in the local graveyard. My association as a child with the graveyard, seems to collect all these memories and ideas together into one merged sensation. I guess this is anyway how a child's mind and possibly even an adults mind might work, i.e. mixing some feelings and events together to form one idea or picture. 'An Ghlaise Bheag' is also a collection of memories and thoughts rolled into one moment in time. In this case it's my adult voice talking. Throughout the book, the 'I' is the poet and represents the ideas, emotions, experiences of the poet, both grounded in reality and dream.

The later sections become darker, especially section three... I certainly agree that Section three is darker, heavier. In this section, the poems draw inspiration from dreams. They tend to be a merging of real events on the one hand and ideas from dreams and meditations on the other hand, while the heart of the poems remains true to the basic emotions of reality. For example in 'Haven', I want to convey the feeling of complete and utter devastation at losing something precious. There also is the theme of femininity and having children, which I would feel is something that I lack. In my mind, it brings into question my femininity and mourns my lack of children.


Can you tell me more about drawing inspiration from dreams? I've been fascinated by dreams for a long time too. About 15 years ago, I had a lot of nightmares. I'd wake up in a cold sweat, the fear from the dream, keeping me awake for hours after. I'd write then, while I was awake, sometimes light fantasies to forget and sometimes, when I remembered snippets of the dreams, I'd write them down, writing the fear out of me, I guess. I didn't really analyse my dreams/nightmares at the time, I just knew the emotions that I felt when I woke up and how remembering even fragments and writing them down, helped. Then about 3 years ago, I did a writers's workshop in Anam Cara Writers' Retreat down in West Cork called 'The Poet and the Dream' with poet, Paula Meehan and dream-worker, Juliet Clancy. During the workshop, we read out our dreams and worked the dreams, basing the work we did on the Jeremy Taylor’s ten basic assumptions about dreams. It was real revelation for me. From then on, I have kept a pen and paper beside my bed.

So you catch your dreams on waking by writing them down? Yes I always have a pen and paper beside the bed. When I wake up, I usually gather a few key words from the different scenes I remember and then sit up and write as much detail as I can. The key for me is not to get too hung up if and when I don’t remember much. Sometimes some tiny detail remembered, even the emotion I have when I wake, is enough. I then can channel even the residual feeling from the dream, to write in that moment, just write whatever comes into my head. Mostly I remember a few scenes at least. Either way, I write whatever I remember of the scenes and the feelings and this can then turn into a poem or story, sometimes almost as I wrote it and sometimes after several drafts.

Do you attempt to interpret them or just lay them down as they are?
Initially I just write them down. Later, sometimes hours, sometimes days, I read over them, work them to strip back/unveil what the dream wants to tell me. I try not to force it too much. Often, there are multiple meanings in dreams and the dreamer can best follow what rings true for them. Often the relevance of a dream or alternative meanings, will become clear after a period of time.

I think dreams can help us, that they know more than we do. What do you think, would you agree? Yes, absolutely. To quote Taylor, I believe that analysing dreams is “using dreams to tap the wisdom of the unconscious”. In working with my dreams, I have had many situations, where dreams have brought me this “wisdom” and advice. A few nights ago, I had a dream, it related to the nervousness I was feeling in my life at having recently left my day job to pursue my writing and painting. The dream confirmed to me the need to continue to trust my instincts which I followed when making these choices.

Do you meditate to find a poem or is it a happy by product?

When I meditate I work in a similar way to how I work with dreams. I often meditate before writing or painting, to ground myself, to clear my mind. If any images or feelings come, I try to put these into words and if words don’t come, I draw or paint to express my responses. I follow the track leading from these meditations which then sometimes lead to a poem, a story or a painting. So, yes, in fact, a poem is more a happy coincidence of a meditation than a primary goal.

You paint as well! I'd love if you came back at later stage to talk about your art. As we end I'd like to ask about the last poem in your collection. 'Secrets' ends with - 'I knew it was better/not to tell'...is this telling us that absolutely all is not revealed here, and nor should it be? I would agree that all has not been revealed in my poems. It feels more like a layer of truth has been uncovered and is being spoken about, which in turn is a kind of preparation for the next layer to be uncovered/unveiled. It feels like a ritual. For me personally, there is a very strong need to speak out.It's like a mission that I need to fulfill. I believe that in speaking out, in bringing into the light, topics such as suicide, depression, abuse, etc., it can help people who are weighed down with these and can give a voice to and empower people who may not have had a voice before.
Whether I believe that all should ultimately be revealed or whether some things should go unsaid, I think it depends on the context/situation. In speaking, I tend to see myself on the side of revealing all rather than holding back. Though in writing, I believe the truth can be expressed without all the details. That said, it is not my aim to hold back details as a kind of trick to create a dramatic effect, it's more that I want to pare back to the centre of things, to present the essence.

What poets do you admire?
Paula Meehan, Mary O'Donnell, Leanne O'Sullivan, Brendan Kennelly, Seamus Heaney.
Seamus Heaney's 'Mid-Term Break', which I read in 5th or 6th class, had a massive effect on me. I remember sitting in the classroom listening to the teacher reading it, having to clench my teeth to stop myself from crying. I realised the power of words and of sharing a story, in all it's rawness.

Do you have a favourite quote or saying that helps keep your writing self on track?
'Be brave, write the truth'.


Thanks Maggie! Click Here to buy Other Things I Didn't Tell


Return to Me
Maggie Breen


I don’t want to hear your words anymore,
that force their way in and down my throat,
like tar funneled into me,
by a raving mob of men, frothing at the mouth.

I don’t want to answer you anymore,
with words that  turn me insides out,
blood dripping from my sockets,
like tears.

I want to be five,
to dance in the dew-damp grass at the back of our house,
to lie on my belly, watch ladybirds and spiders
crawling in the undergrowth.

I want to hold my breath,
to freeze a perfect moment,
no ugly scars.
I want to see my reflection in the rain. 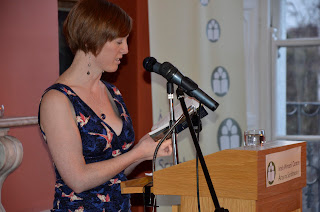 Published in The Stinging Fly and The Scaldy Detail, Maggie Breen has been writing since as far back as she can remember. Compelled to write as a form of speaking out, she draws inspiration from the familiar at home, childhood memories, her extensive travels and vivid dreams. Originally from Monageer, Co. Wexford, she divides her time between Sallins, Co. Kildare, and Dingle, Co. Kerry.

I never thought to write down dream before. Dreams are so vivid and dig at deep emotions and visuals, I can see how they'd be perfect poetry inspiration.